Have a single list of rooms where the user can compare rooms between description, allocation and price

The room selector is a component that it’s used to allocate people that have previously selected a price on the price table selecting the type of room they want with the appropriate room allocation.
With the new design the user experience is noticeably increased making the customer able to compare between rooms, and their descriptions, prices (updated according to the occupancy) and occupancy within the same list.

New room selector on production on the Dutch site

Challenge: have a single list of rooms where the user can compare rooms between description, allocation and price

Let's have some context

After filing the quick search fields on the home page, with the departure airport, date, duration and participants, the user goes to the search and book page where he/she is able to select an accommodation. Once on the accommodation page the user is able to check and select a price within the price table.

The room selector is a component that it’s used to allocate people that have previously selected a price on the price table on the rooms they want with the appropriate party composition.

Firstly, This means that the old room selector - basically a dropdown with a list of the available rooms (see an example below) - is not valid anymore since with the new price table, that performs much better, the user can not compare between type of rooms, other prices options and occupations.

Secondly, because the old room selector already has some usability problems such as the impossibility to compare the information of the rooms, the limitation of the content within a dropdown and other not well resolved design issues. 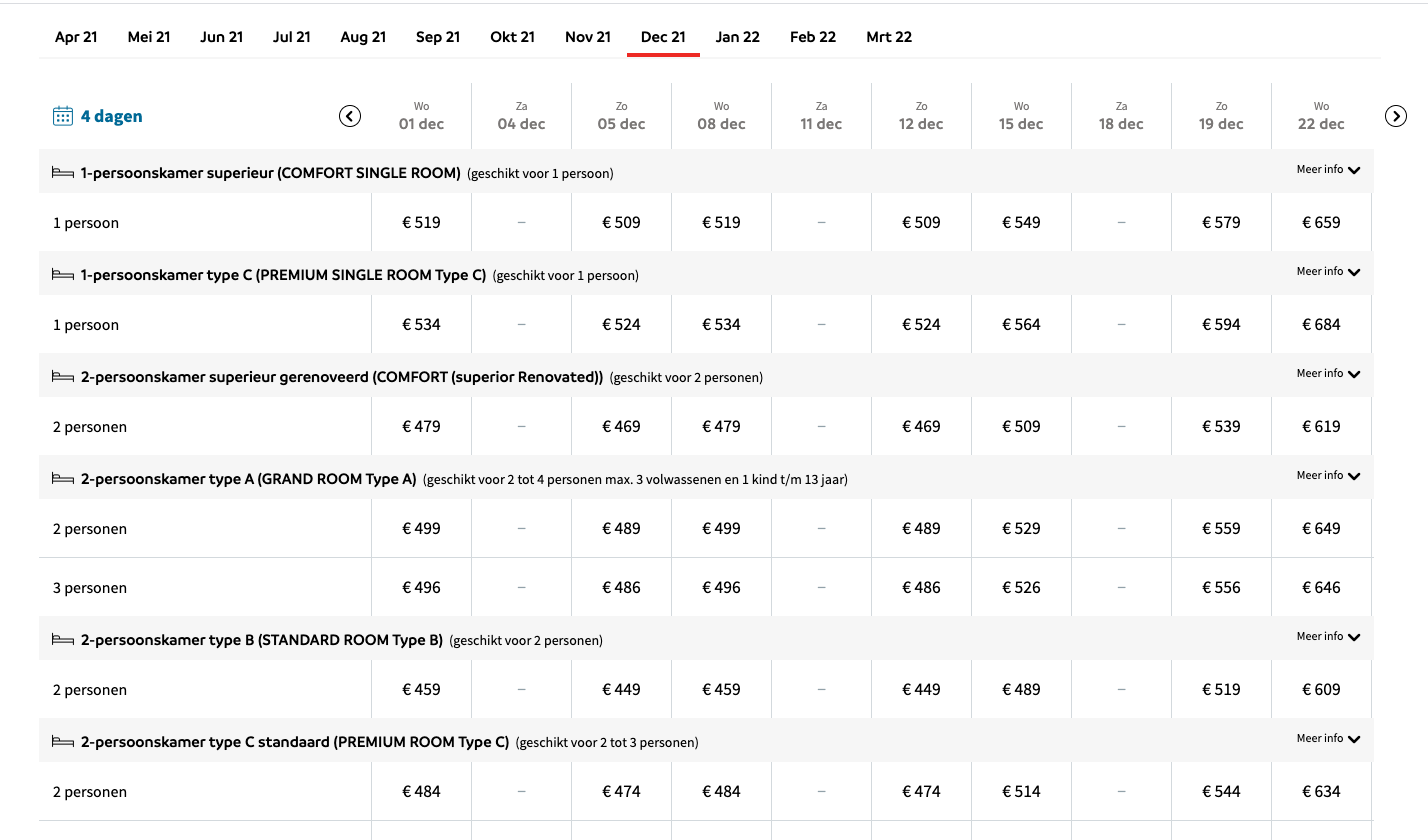 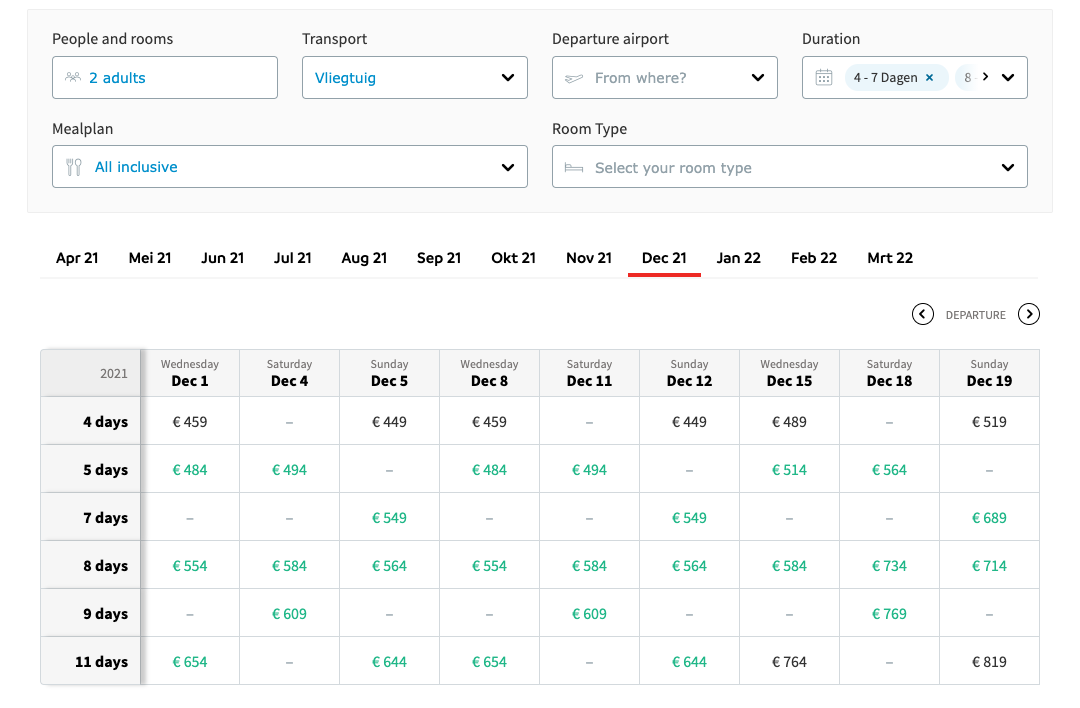 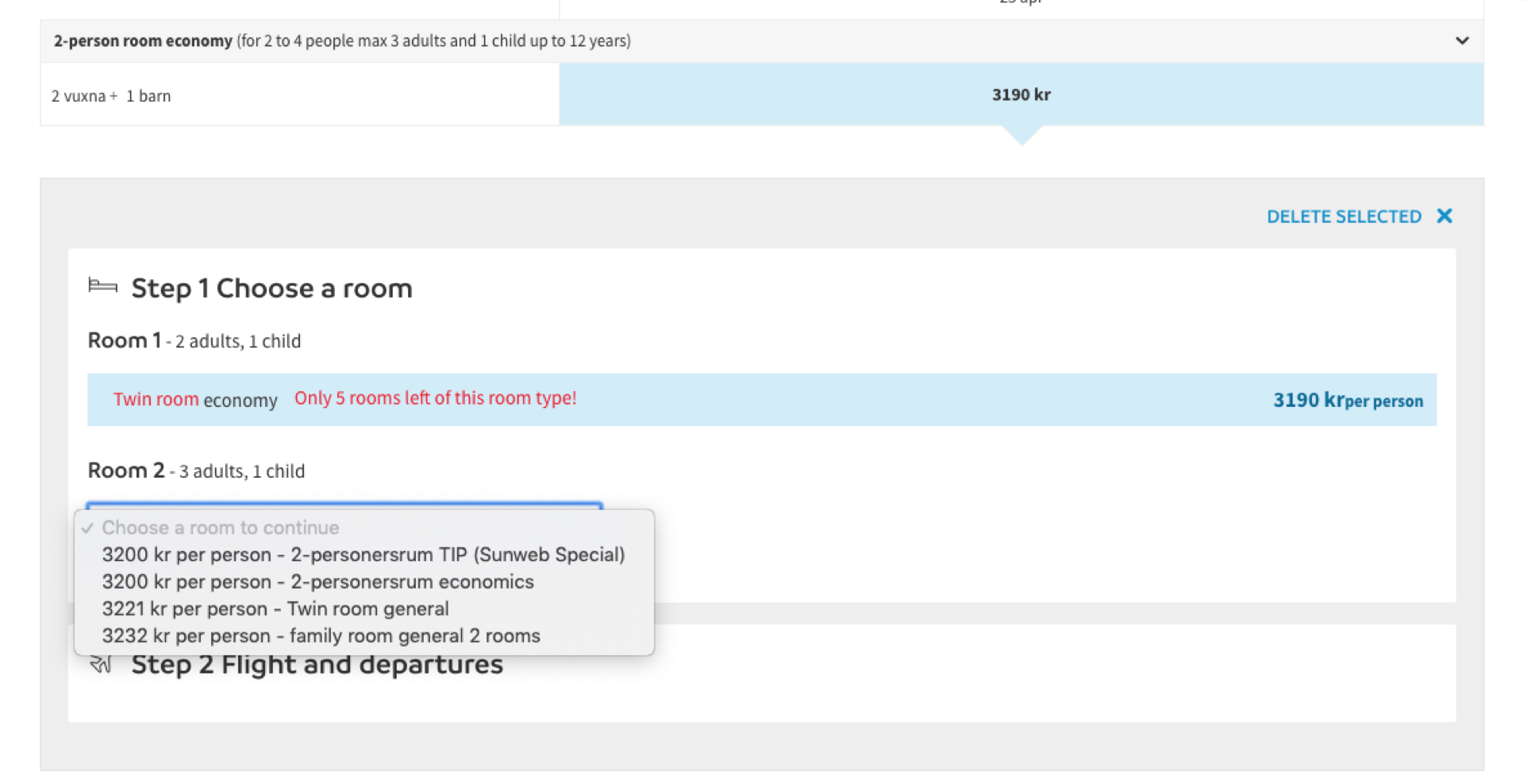 Example of the old room selector through a dropdown

Proposed solution?  Having a non-complex design of a list where the customer could easily compare between rooms, and their descriptions, prices (updated according to the occupancy) and occupancy options on the same list.

To consider Sunweb is the main brand of a group of travel package seller brands with different or complementary targets. Not all these brands are selling the same, some of them only sell winter packages while others just sell summer packages and sometimes different kinds of products also.
On the other hand the way to build the front-end part of all these sites is through a Design system - that we the IT team already bought a pair of years ago - this means that when we design a component we are designing for different brands at the same time.
Why am I mentioning this? Because the different personas and the different customer journeys. Sunweb has recently created a group of personas and customer journeys representing each brand but on the first stage of this issue personas/focus groups were considered in a generic way and it kept the existing generic customer journey.


Note: A big difference if Sunweb is compared with other companies is that while competitors use to build the travel packages dynamically step by step, Sunweb comes from a non digital business model based on selling closed travel packages per catalog, were the customer/seller was able to compare between all the possible combinations (departure, duration, type of room, occupation...), during the digitalization this model was been migrated to a site were the user can easily find the perfect package, with the benefits of the web 2.0. This explains the complexity of this component that has to provide to the user the chance to compare between the details of all the closed packages.

User centered design is the methodology that it's considered more effective to design new features. That's because the user it's taken into account in every single step and this allows to build nice products through facts instead of hypothesis. During the design of the room selector it tried as far as possible to follow all the steps of the UCD.

Since the aim of this issue was to adapt the room selector from a previous existing component. It wasn’t think as a completelly new feature but as improvement in therms of engineering from an existing old one.

What competitors are doing? 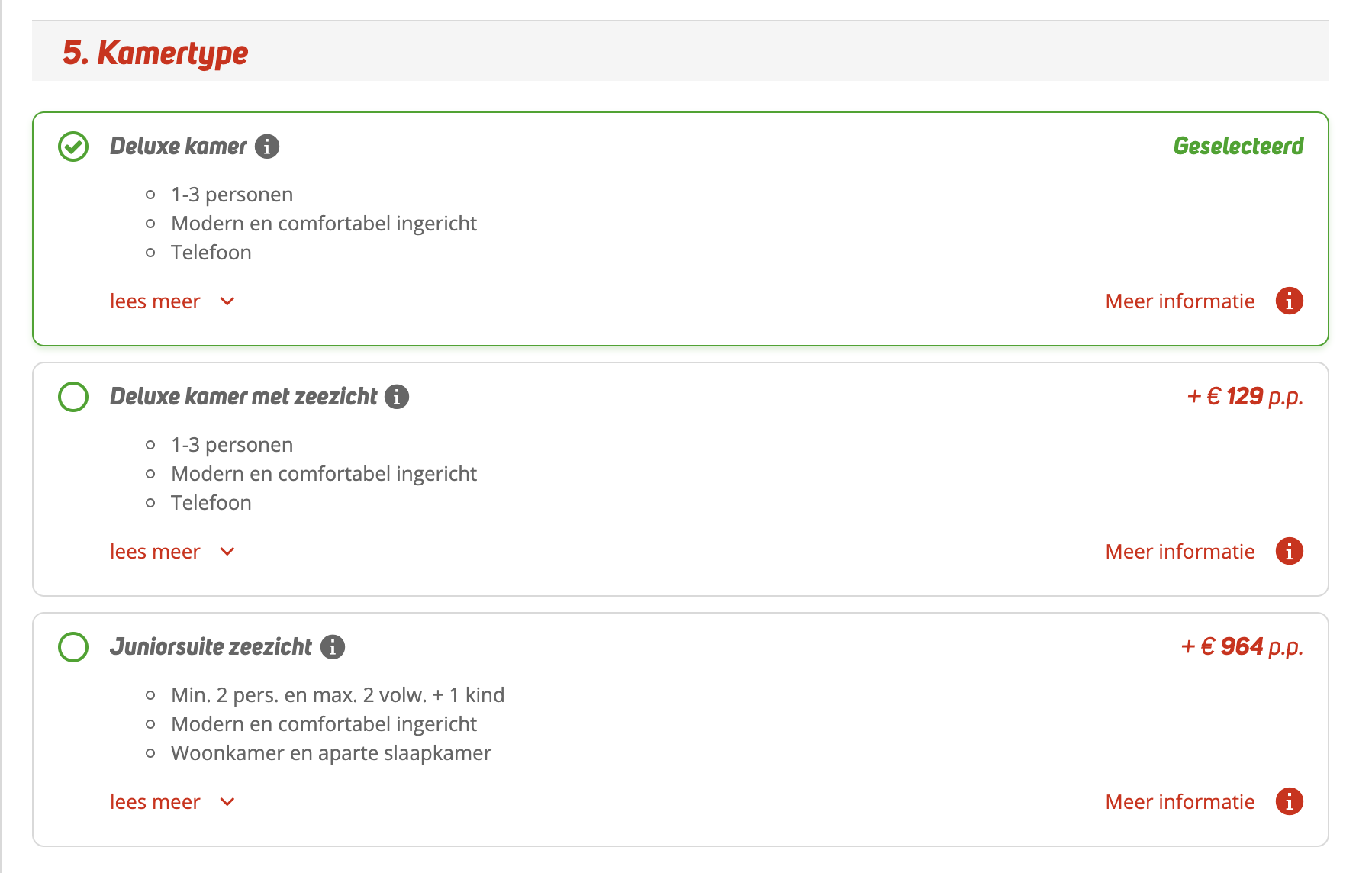 There are not a lot of competitors selling this kind of travel package in the way Sunweb does. A company that does something similar is Corendon.
If we check their room allocation is basically a list with different room options for the preselected package with the difference that they already did the party composition.

From the beginning it was thought to resolve the room selector such as the flight selector, with a list of rooms with radio buttons, but several functional problems was found. 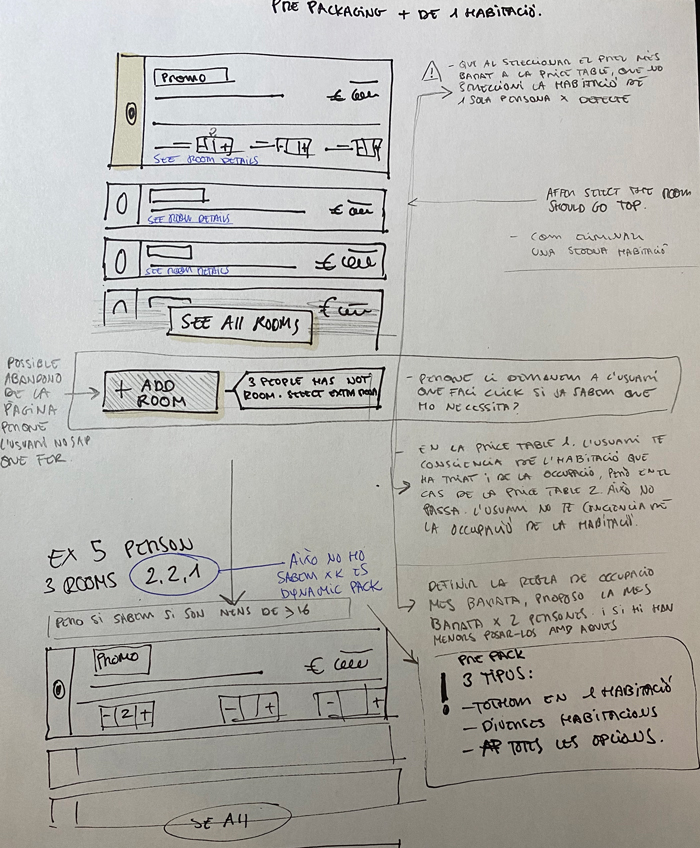 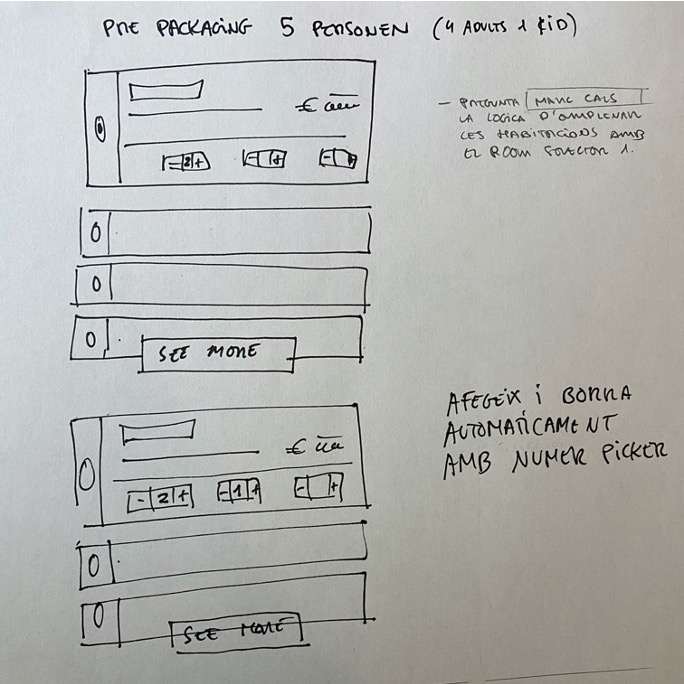 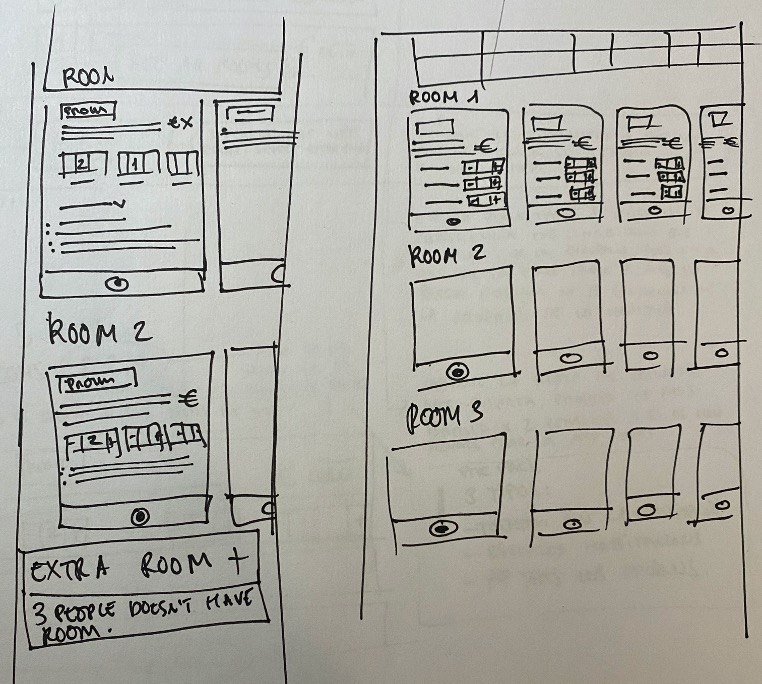 The mockup was tested with internal colleagues and the 100% of them had a successful experience according to the proposed scenario. 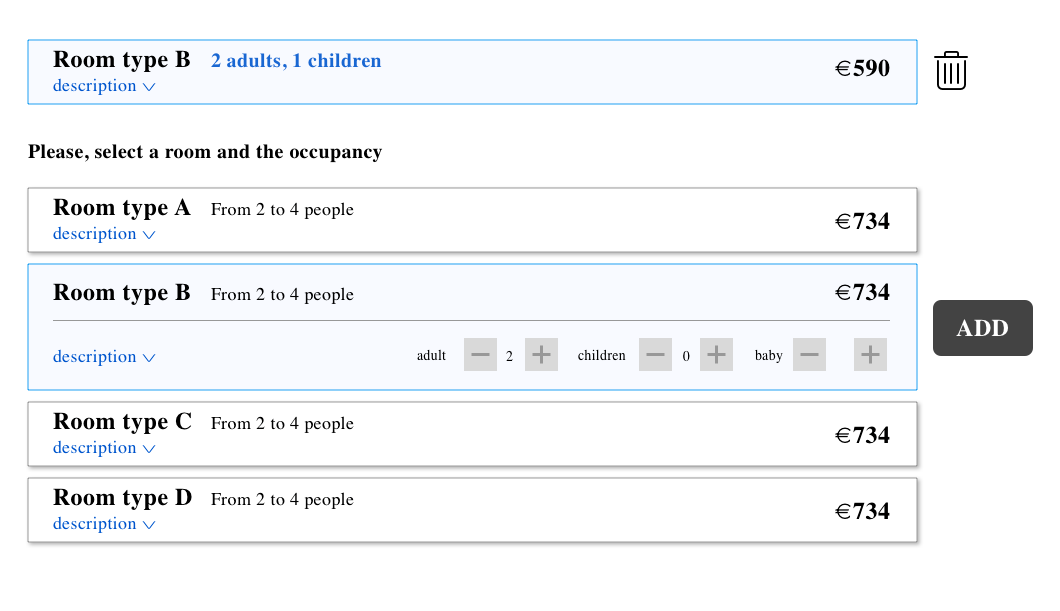 It was designed a mockup with the following approach: 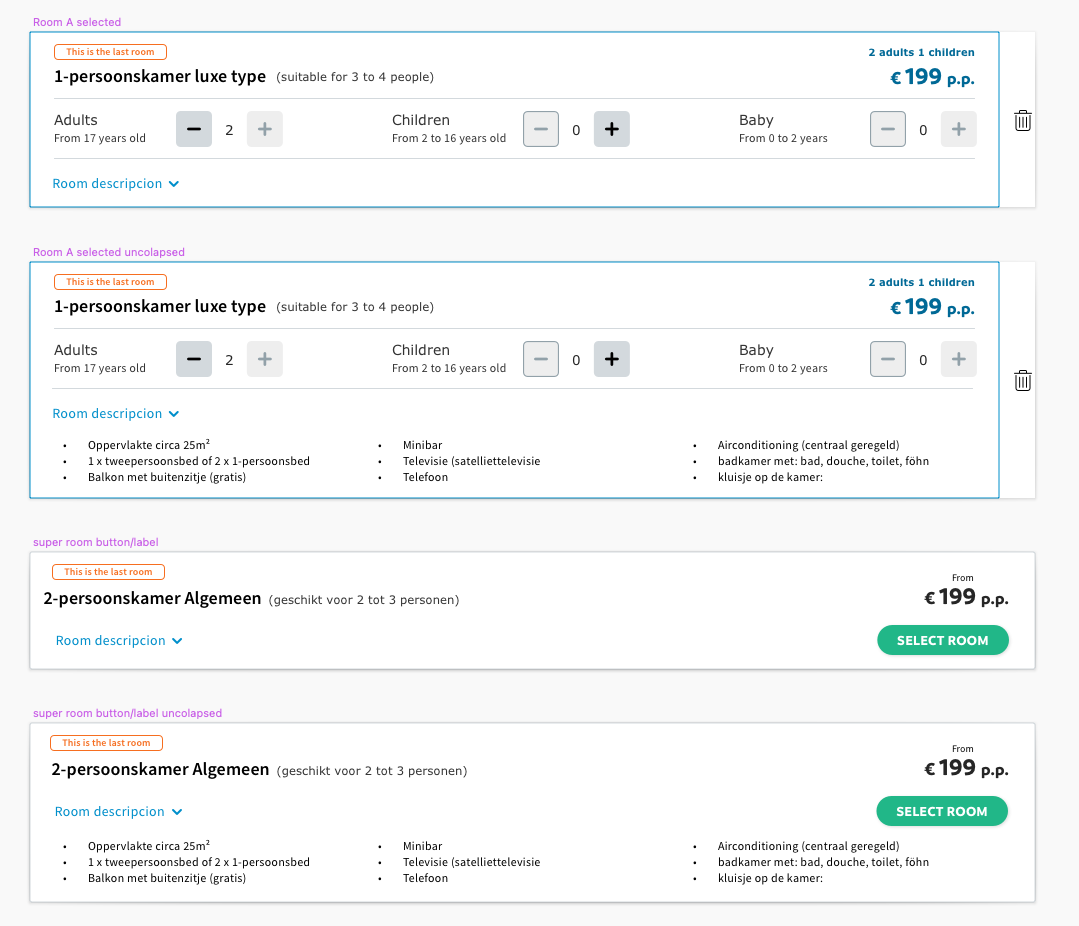 Some symbols for the desktop and mobile version 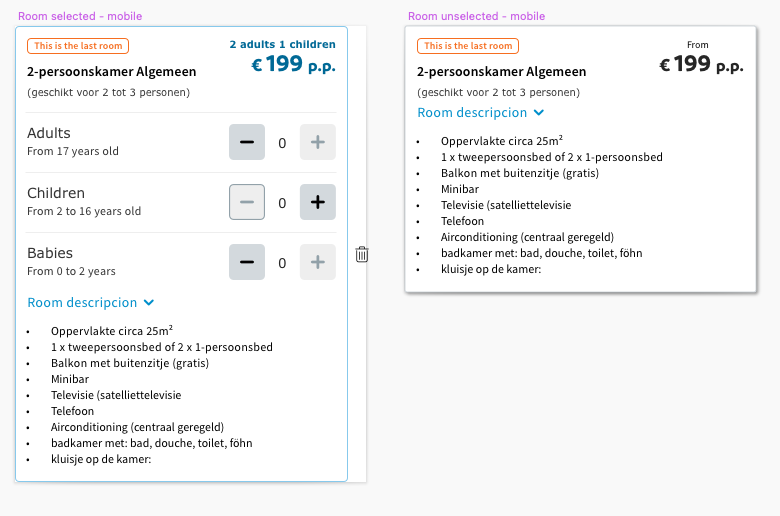 The design of the prototype was thought re-using all the components already created on the design system, such as the price, buttons, number steppers, labels, colapsibles, etc.

A pair of examples of the component live for different brands 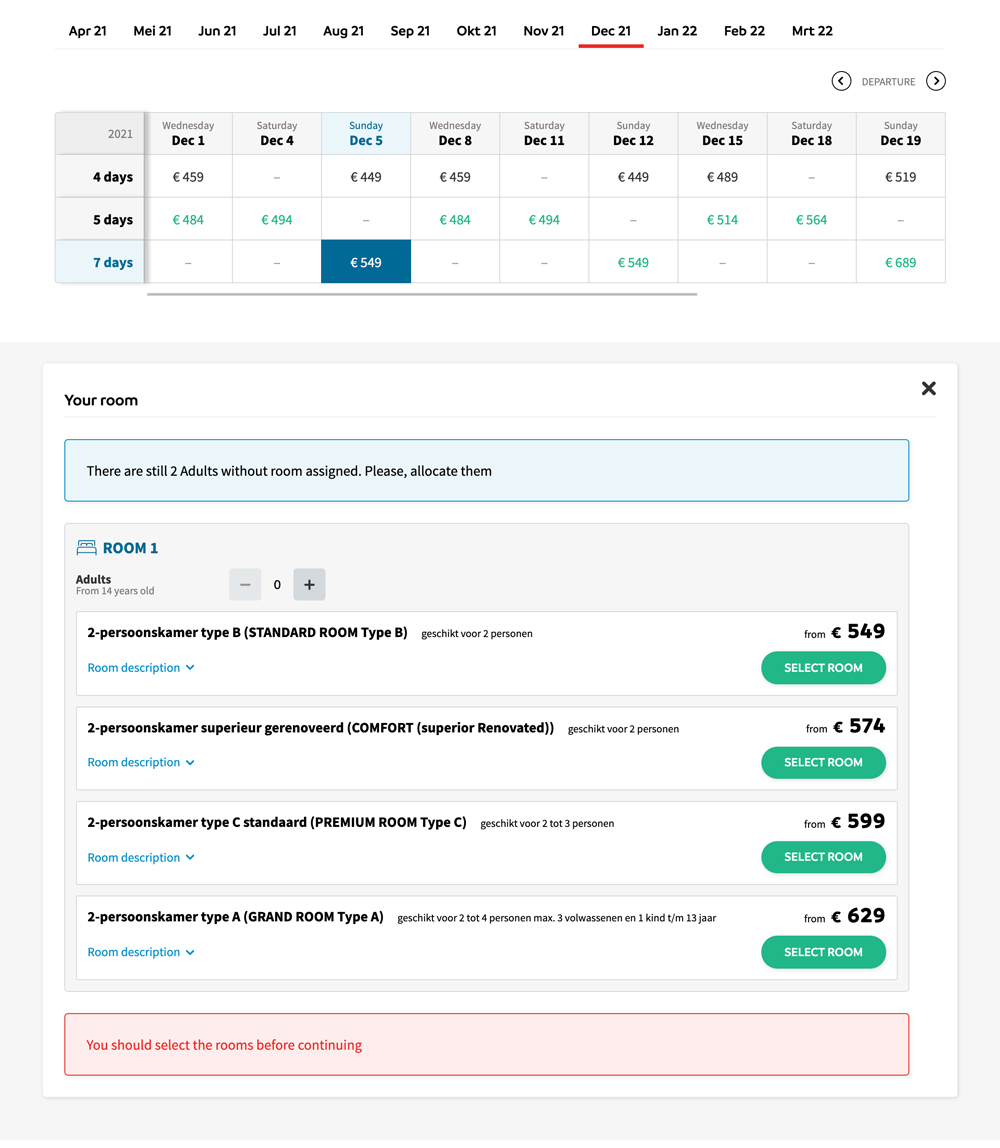 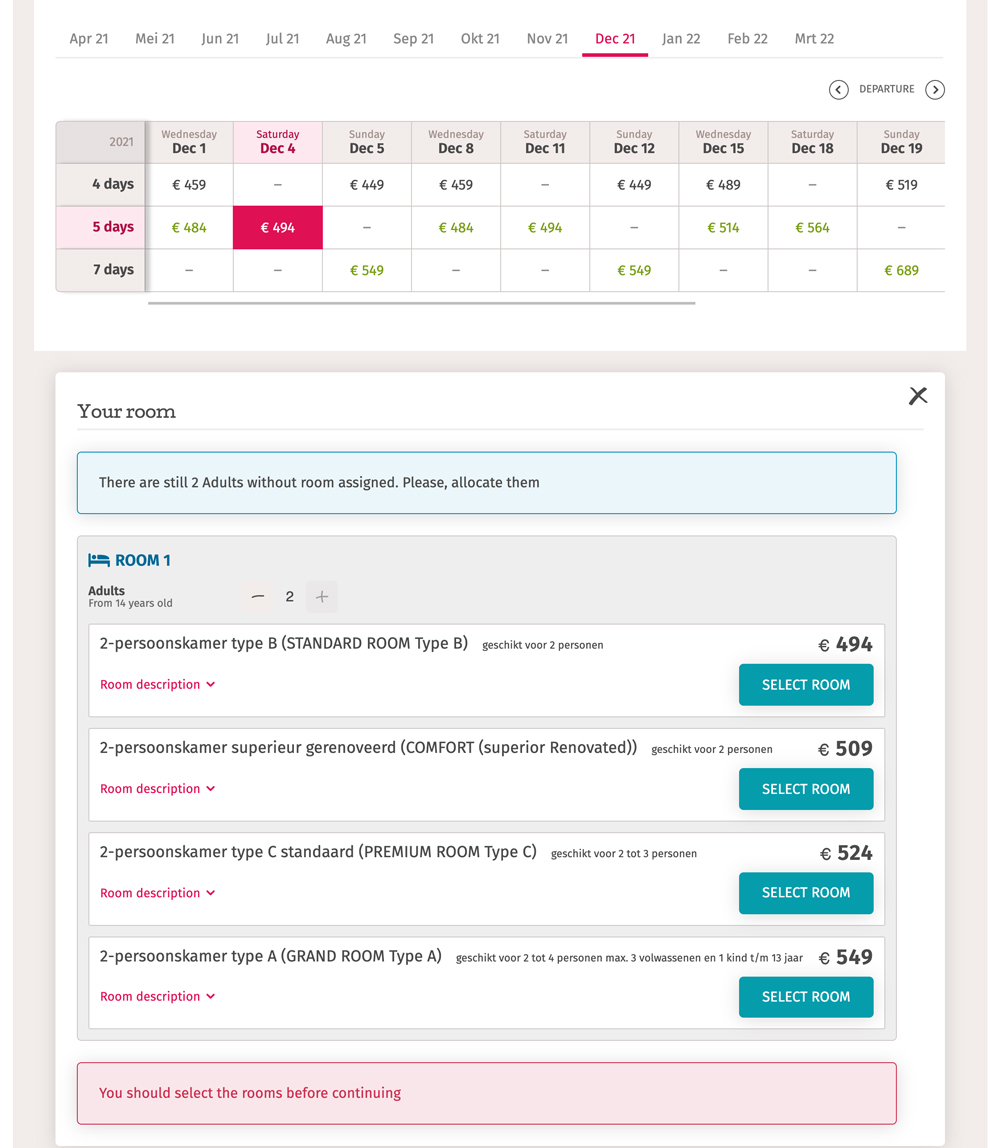